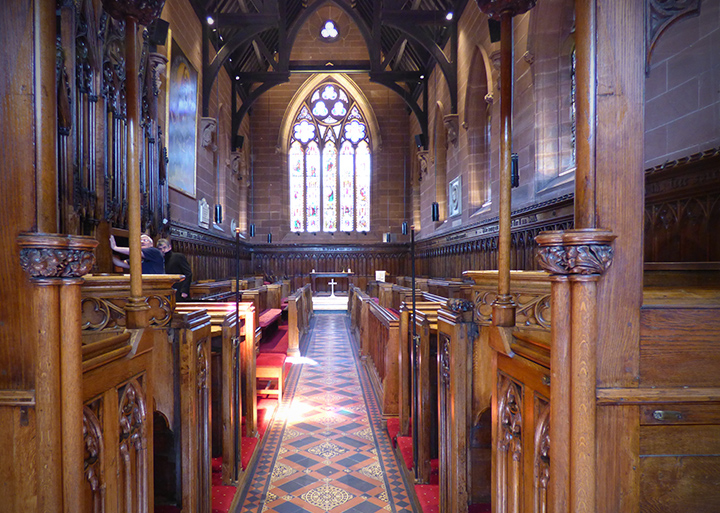 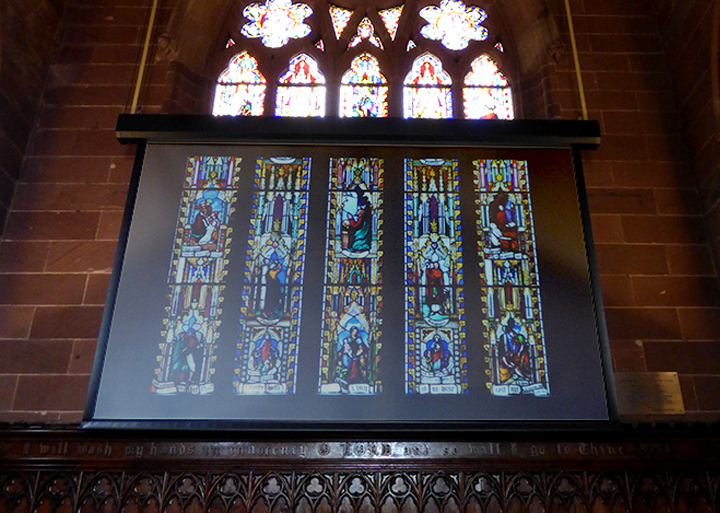 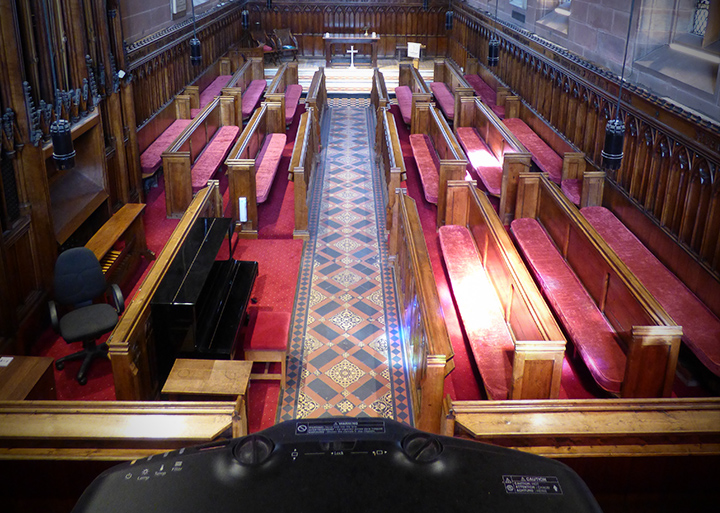 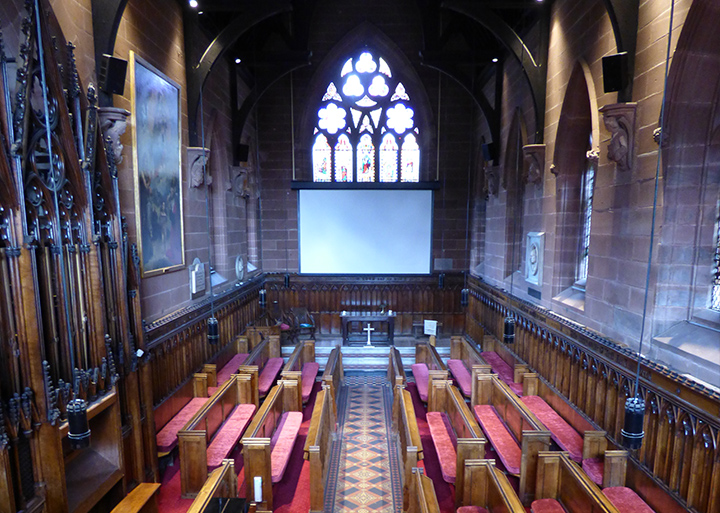 Big screen projection helps University of Chester Chapel bring video and sound into worship with a merging of old and new as 175 year old Chapel brings the big screen experience to the congregation.

It would appear that the singing is louder at the University of Chester Chapel as eye lines are raised away from hymn sheets to the impressive double drop 4-metre wide projection screen. Installed alongside a new audio system and part of a wider 175th anniversary refurbishment of the Chapel, the audio visual installation provides effective audio and bright images.

The usage of the screen is much wider than just a prompt for hymns, as The Dean of Chapel, Reverend Canon Dr Peter Jenner explains,

We like to bring video into our Services, but before the introduction of the new system it was a real challenge; set up of the mobile unit was difficult and the end result disappointing, we were simply not able to include video as often as we wanted.
The new AV equipment has proved very useful for us. The quality and size of the projection is impressive, encouraging innovation and experimentation in worship; this fits well with our approach as we continually seek to include creative elements of all sorts in Chaplaincy events.

The brief for the project required an upgrade to the existing audio system along with the introduction of a new large screen projection display. Specified by Dave Evans, development and support manager, Learning and Information Services at the University of Chester, the solution needed to deliver great image and sound quality but also be discreet and in keeping with the character of the building.

The Epson EB-G6900WU was selected as the projector best suited for the installation. Tony Crossley, Pure AV pre-sales technical support director and design lead on the project explains,

The Epson unit offered the brightness level and high definition image quality needed for the environment. This combined with the flexibility of the HDBaseT connectivity made it the perfect choice for the Chapel.
We have worked with Epson products for many years now and have always been pleased with both product performance and the after sales support provided.

One of the biggest challenges of the project was the positioning and management of the projection screen in a way that was sympathetic to the environment. It was also vitally important to protect the fabric of the building and ornate tiled floor in the area around where the screen needed to be installed. With these limitations in mind Crossley proposed the introduction of a double drop projection screen. Whilst this would be one of the largest double drop screens in the UK, it also offered a tidy solution that could be effectively hidden from sight when not in use.

Dean of Chapel, Peter Jenner is very enthusiastic about the design choice,

The discreet nature of the installation is also carried through to the audio system. Designed by Pure to offer good sound quality at a modest price, the system made use of Monitor Audio speakers and amplifier along with an Extron digital signal processor. Using the in house audio expertise at Pure and the Extron software it was possible to secure the correct position for best audio output despite the challenges created by the high ceilings and complex internal surfaces of the Chapel.

The improvement in sound performance has also been noted by Reverend Jenner who recounts the feedback following one of the first occasions when the voice amplification was used.

The Reverend goes on to reflect that the usage of the Chapel today is somewhat different to that which the congregation of 1840 would have experienced and with initiatives planned to include the live streaming of services to other University campuses and links to events at Chester Cathedral, that usage looks set to further evolve.

The system is very easy to control; the mobile solution we used previously was difficult to set up and made us question whether the effort was worthwhile. With the new system it is very simple to introduce video and imagery into worship and the screen has quickly become a very natural part of the service, we are extremely happy with the solution Pure AV has created.